How digital finance could boost growth in emerging economies

Delivering financial services by mobile phone could benefit billions of people by spurring inclusive growth that adds $3.7 trillion to the GDP of emerging economies within a decade.

Two billion individuals and 200 million micro, small, and midsize businesses in emerging economies today lack access to savings and credit. Even those with access must often pay high fees for a limited range of products. Economic growth suffers. But a solution is right in people’s hands: a mobile phone. Digital finance—payments and financial services delivered via mobile phones and the Internet—could transform the lives and economic prospects of individuals, businesses, and governments across the developing world, boosting GDP and making the aspiration of financial inclusion a reality.

A new report from the McKinsey Global Institute (MGI), Digital finance for all: Powering inclusive growth in emerging economies, is the first attempt to quantify the full impact of digital finance. In addition to extensive economic modeling, the report draws on the findings of field visits to seven countries—Brazil, China, Ethiopia, India, Mexico, Nigeria, and Pakistan—and more than 150 expert interviews. It also lays out the key conditions that will need to be met to capture the benefits.

The research finds that widespread adoption and use of digital finance could increase the GDPs of all emerging economies by 6 percent, or a total of $3.7 trillion, by 2025. This is the equivalent of adding to the world an economy the size of Germany, or one that’s larger than all the economies of Africa. This additional GDP could create up to 95 million new jobs across all sectors of the economy.

Many stakeholders would benefit. Digital finance could provide access to 1.6 billion unbanked people, more than half of them women. An additional $2.1 trillion of loans to individuals and small businesses could be made sustainably, as providers gain newfound ability to assess credit risk for a wider pool of borrowers. Governments could gain $110 billion per year by reducing leakage in public spending and tax collection. Providers of financial services would benefit, too. They stand to save $400 billion annually in direct costs by shifting from traditional to digital accounts, which can be 80 to 90 percent less expensive to service. By expanding their customer base, providers increase revenue opportunities and could sustainably increase their balance sheets by as much as $4.2 trillion. 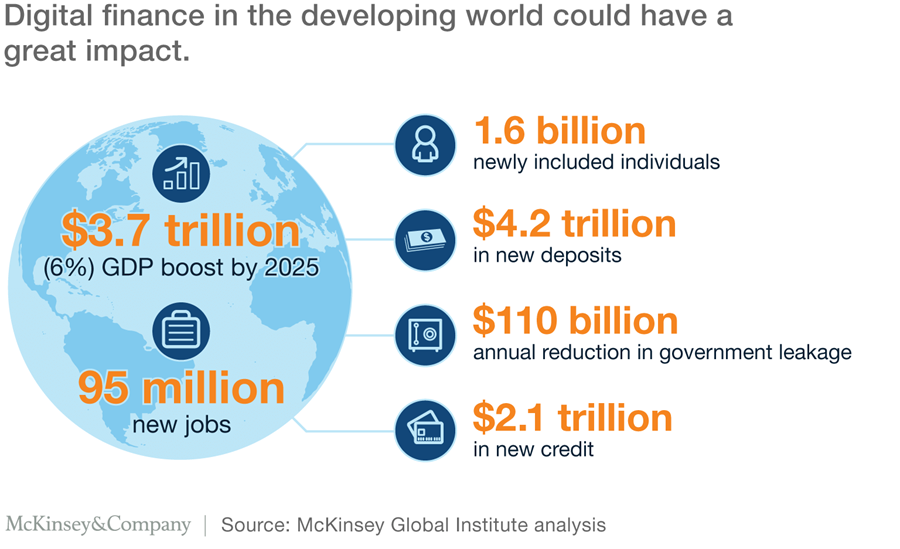 The economic potential varies significantly, depending on a country’s starting position. Lower-income countries such as Ethiopia, India, and Nigeria have the largest potential, with the opportunity to add 10 to 12 percent to their GDP, given low levels of financial inclusion and digital payments today. Pakistan has a somewhat lower GDP potential, at 7 percent. Middle-income countries such as Brazil, China, and Mexico could add 4 to 5 percent to GDP—still a substantial boost.

Digital payments and financial services are part of the vital infrastructure of a modern economy, enabling individuals, businesses, and governments to transact cheaply and efficiently. For a range of companies, including banks, telecommunications companies, payments providers, financial-technology start-ups, retailers, and others, the potential business opportunity is large. In most countries, which players will dominate is still up for grabs.

The opportunity to accelerate inclusive growth could be addressed rapidly and without the need for major investment in costly additional infrastructure. Mobile phones are the game changer that make this all possible. In 2014, nearly 80 percent of adults in emerging economies had a mobile phone, while only 55 percent had financial accounts. Almost 90 percent of people in emerging economies have access to a network, and the share of those with 3G or 4G coverage is growing.

To capture the opportunity, businesses and government leaders will need to make a concerted and coordinated effort. Three building blocks are required: widespread mobile and digital infrastructure, a dynamic business environment for financial services, and digital finance products that meet the needs of individuals and small businesses in ways that are superior to the informal financial tools they use today.

Widely used digital finance has the power to transform the economic prospects of billions of people and inject new dynamism into small businesses that today are held back for lack of credit. Rather than waiting a generation for incomes to rise and traditional banks to extend their reach, emerging economies have an opportunity to use mobile technologies to provide digital financial services for all, rapidly unlocking economic opportunity and accelerating social development.